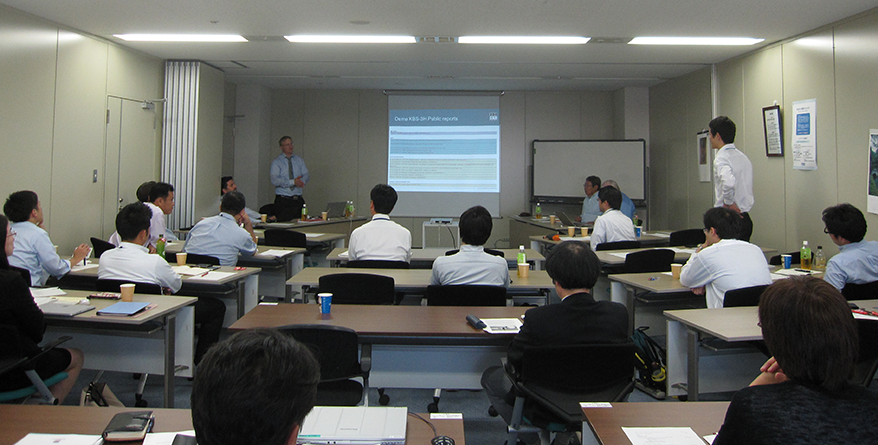 NUMO has technical cooperation with both domestic and international organizations about geological disposal. NUMO and SKB, the Swedish implementer of geological disposal, have been sharing the technical information and R&D outcome of the Äspö Hard Rock Laboratory of SKB.
As part of activities in accordance with the cooperation agreement, KBS-3H Seminar was held in NUMO on June 14 to 15, 2017. SKB’s technical experts explained the current situation, challenge and future plans about the R&D of the KBS-3H method that is one of disposal concepts in Sweden. SKB, NUMO and domestic relevant organizations had a lively exchange of views about disposal methods including comparison with the PEM method developed by NUMO.
NUMO will continue to exchange technical information with SKB toward the effective R&D for the realization of geological disposal in Japan sharing its outcome with Japanese relevant organizations.

The seminar summary and technical outlines of the “KBS-3H method” and the “PEM method” are as follows:

KBS-3 is a disposal concept of high-level radioactive waste (HLW) developed in Sweden by SKB. There are two types of geological disposal methods: one is that the disposal holes into the rock from the drift are drilled vertically and the other is that they are drilled horizontally. The vertical deposition of KBS-3 is called KBS-3V and the horizontal deposition is called KBS-3H.

On March 2011, SKB applied licenses to construct and operate a KBS-3 repository for final disposal of spent nuclear fuel at Forsmark to the Swedish Radiation Safety Authority (SSM) and the Land and Environment Court. Finland also adopts KBS-3 for the final disposal repository of spent nuclear fuel being built by Posiva at Olkiluoto. KBS-3V has been considered as the reference disposal method in Sweden and Finland. 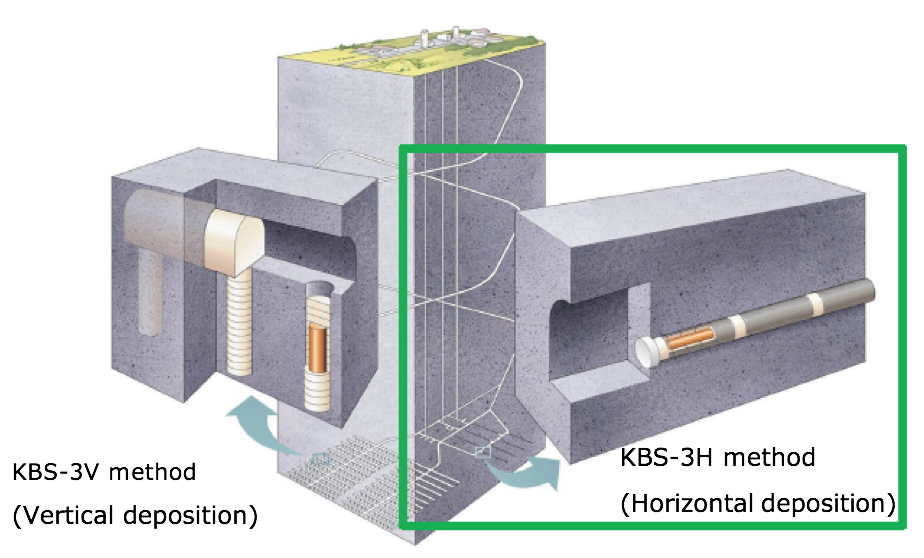 SKB has in collaboration with Posiva since 2001 investigated whether KBS-3H can constitute an alternative to KBS-3V. For both KBS-3 concepts the spent nuclear fuel is encapsulated in a copper canister with a nodular cast iron insert, surrounded by bentonite buffer and placed in a geological repository in the dynamically and chemically stable crystalline bedrock. For the horizontal concept the canister and the buffer are assembled in a supercontainer held together by a perforated outer titanium shell. Up to 30 supercontainers are placed in a drift which is up to 300 meters long in KBS-3H. Between supercontainers distance blocks of bentonite clay are placed. In KBS-3V, canisters are deposited vertically in individual deposition holes, drilled from the floor of the deposition tunnel, surrounded by bentonite clay and without steel supercontainer shells. The rock volume that needs to be excavated for a KBS-3H repository is smaller than for KBS-3V, which also means that smaller volumes need to be backfilled. 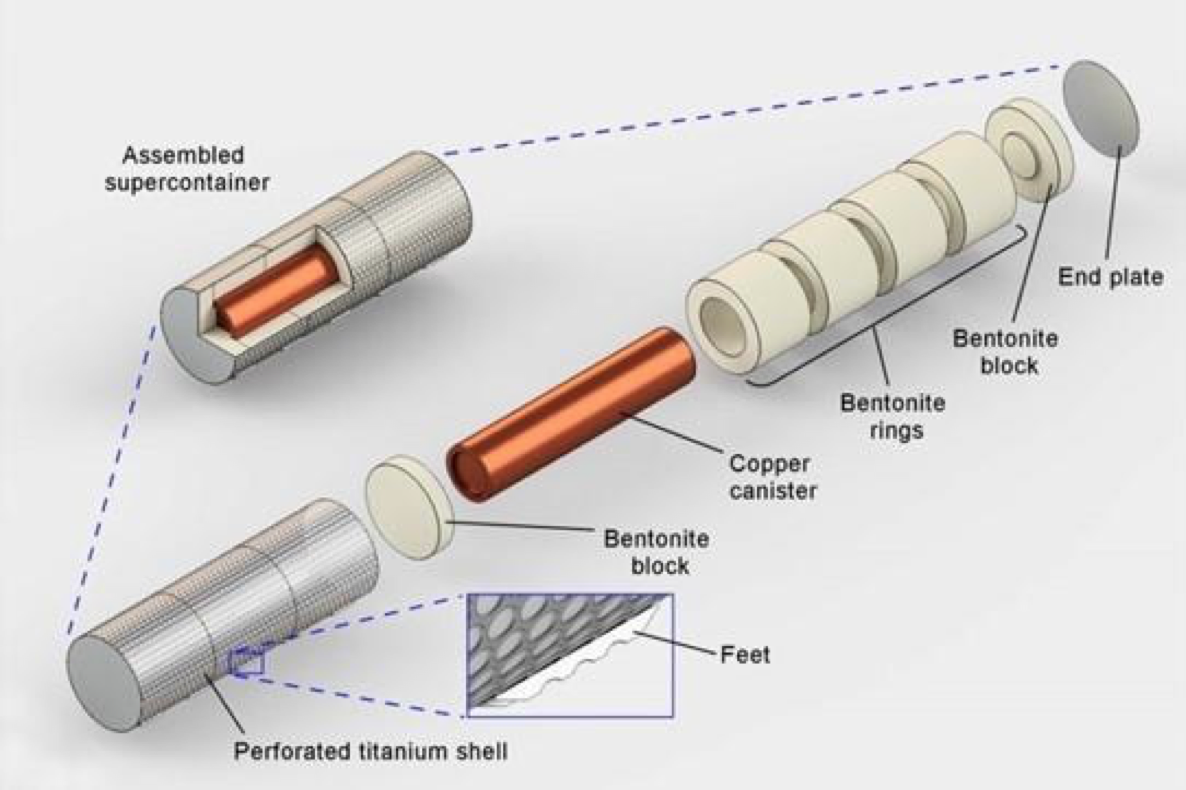 Example of design about KBS-3H

NUMO has been developing R&D of the “Prefabricated Engineered Barrier System Module” (PEM) method in the case of horizontal deposition in terms of the manageability of quality control and the workability in the underground condition.

In the PEM method, the bentonite buffer and overpack with vitrified waste are prefabricated inside a steel handling shell (PEM container) in a surface facility and then the entire module is transported to and emplaced horizontally in the drift. The advantages of the PEM method are improvements of the quality and the efficiency of buffer fabrication in a surface facility where there is no space constraints compare to underground, low sensitivity to humidity in the underground condition and higher speed of emplacement. 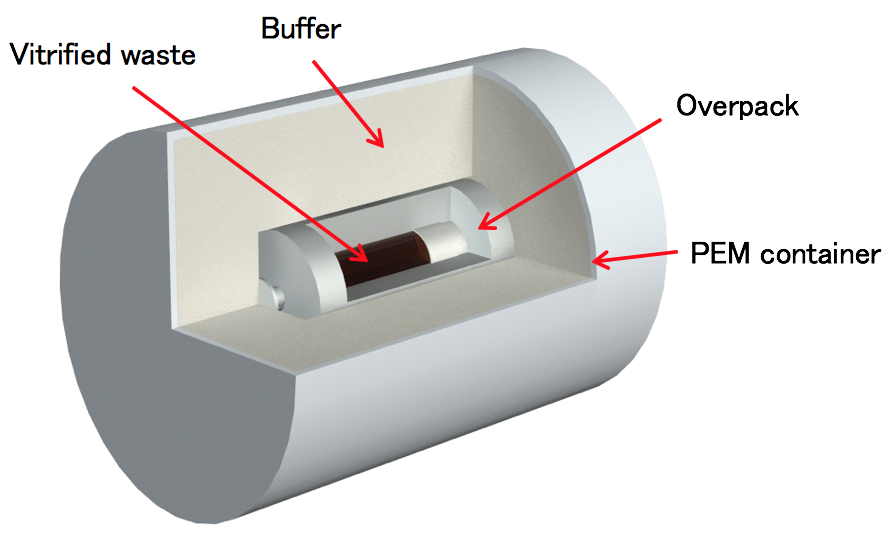 Overview of the KBS-3H seminar

・Research, Development and Demonstration (RD&D) program for KBS-3H
Research, Development and Demonstration (RD&D) program for KBS-3H design development started in 2001 in Sweden to investigate the feasibility of an alternative method of KBS-3V. SKB has, in cooperation with Posiva, carried out RD&D of KBS-3H about drilling, bentonite buffer, plugs, containers, the possibility of manufacturing, etc. As part of the RD&D, a full-scale demonstration of technology for KBS-3H, the Multi Purpose Test (MPT), has been under way since 2013 by using a tunnel, a 95 meters long drift at the -220 meters level in the Äspö HRL. NUMO participated in several activities of MPT. In the recent demonstration, the KBS-3H project is carrying out a full scale heater test autumn 2016 in order to assess the heat impact on the bentonite buffer in the supercontainer during the time of assembly and installation of the supercontainer in a drift. KBS-3H may be more sensitive to chemical erosion of bentonite followed by possible copper corrosion due to the sulphide dissolved in the groundwater. Technology development will focus on completing, industrializing and optimizing the system for vertical deposition during the next few years. Further research in the area of chemical erosion will continue. If safety issues are solved, SKB intends to re-evaluate whether the economic advantages of KBS-3H could nevertheless justify a change. 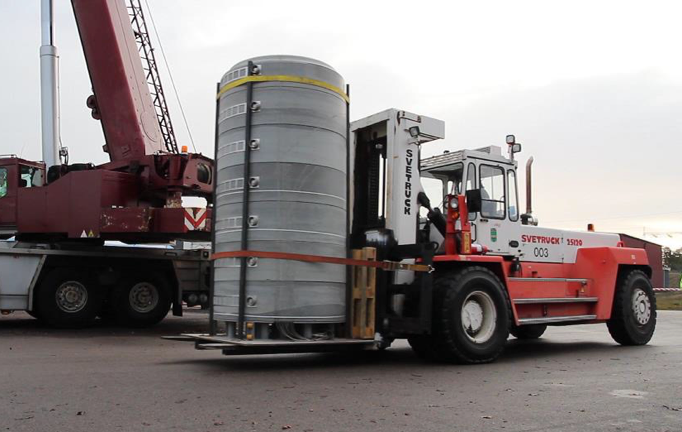 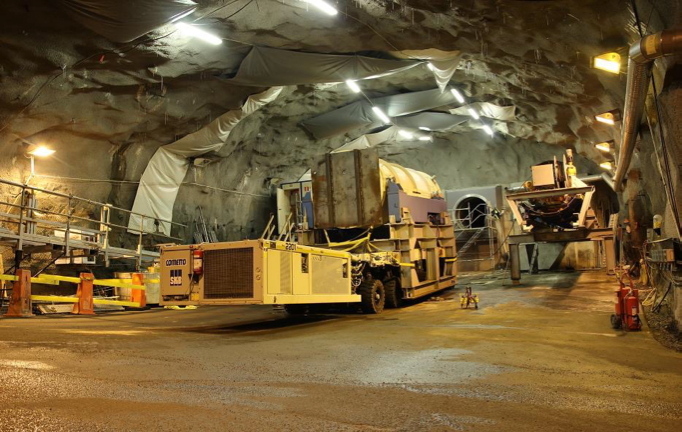 ・Exchange of views about technology for horizontal deposition method
SKB’s technical experts explained the current situation, challenge and future plans about R&D of KBS-3H, which is similar horizontal deposition as PEM.
There were many participants from domestic relevant organizations as well as SKB and NUMO because the seminar was held as part of activities in accordance with the cooperation agreement.
The current R&D of KBS-3H and the way of ensuring the safety were shared. Participants had a lively exchange of views about disposal methods including comparison with the PEM method developed by NUMO.

Future plans and works of NUMO

Sweden plans to construct a repository at Forsmark in the municipality of Östhammar. Canisters with nuclear spent nuclear fuel will be disposed at the depth of 500 meters in 1.9bn year-old granite. The repository will have capability to store 12,000t of used nuclear fuel in 6000 copper canisters.

On the other hand, Japan plans geological disposal of high-level radioactive waste vitrified by the reprocessing of spent nuclear fuel of nuclear power plants. Japan has a plan of a repository for over 40,000 vitrified wastes in stable host rock formation more than 300 meters underground. Waste volume and the amount of heat generation of waste are different between the disposal of spent nuclear fuel waste and of vitrified waste. 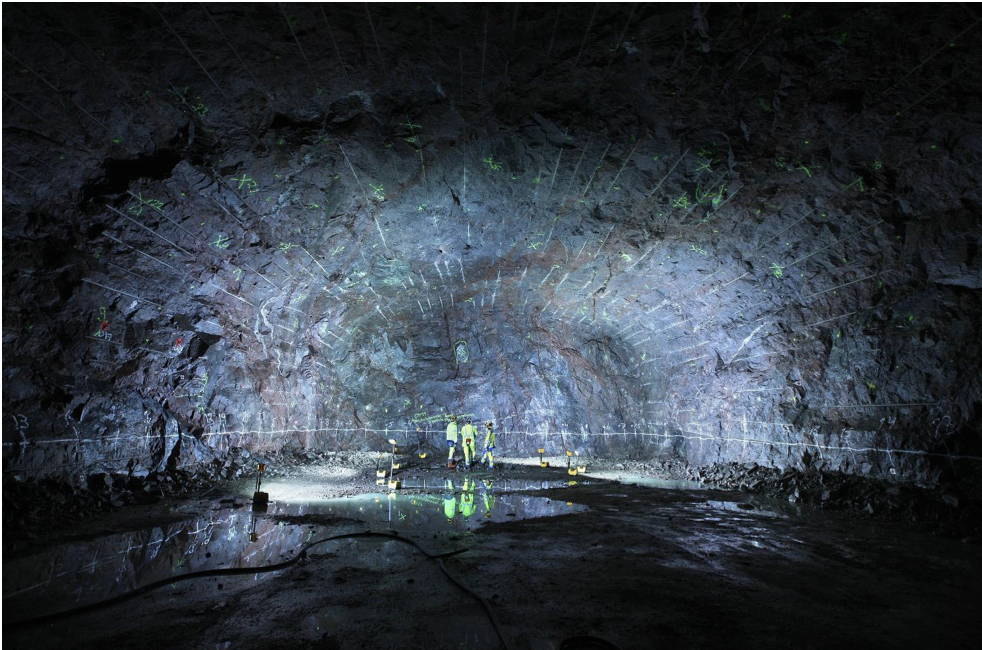 ***Please see the FAQ for answers to our most frequently asked questions.

I accept the Handling of Personal Information.